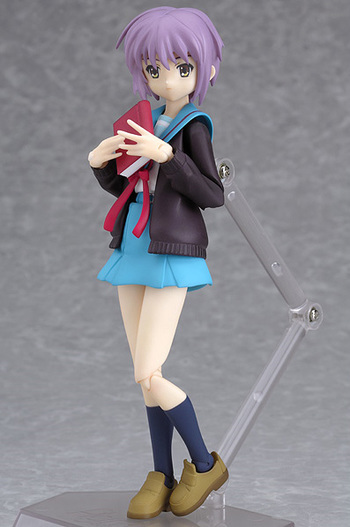 Figmas are poseable action figures commonly of anime characters (primarily girls) produced by the illustrious and industrious Max Factory and Good Smile Company. Figmas differ from Nendoroids and posed PVC statues in the sense that they are extremely poseable, come with a wide variety of accessories and are often very show-accurate in terms of design. They are usually 125-145mm tall, with figures of the same series usually in scale with each other.

The first Figma was a special edition Haruhi Suzumiya based on and bundled with the PS2 game, Suzumiya Haruhi no Tomadoi. It was released on January 31, 2008 with the product code SP 001. In 2008, the first mass produced figma, Yuki Nagato from the same series was released. Since then, the line has covered a plethora of popular anime including Lucky Star and Puella Magi Madoka Magica, as well as other franchises like Fate/stay night, Fireball and Robocop (yes, you did read that right).

Due to their inherent posability, they tend to be great fun to either simply mess around with or have set up in elaborate dioramas, aided by mostly interchangeable parts and a fairly consistent scale. There are lines of supplementary accessories targeted solely at Figmas due to how popular they are, such as EX:ride and di:stage.

Figma currently leads the market in anime action figures thanks to its plethora of popular licenses, although there are contending lines, the most popular being Figutto!, Full Puni! and Gutto-Kuru. Revoltech's Fraulein line offers larger and sturdier figures, but they tend to be less articulated and the joints are not particularly suited for humanoid non-robotic bodies.

Tropes specific to this toyline: