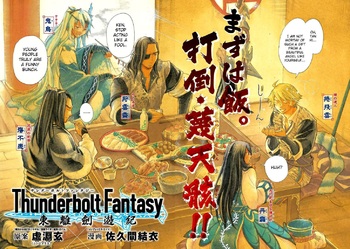 It is created by Gen Urobuchi. Despite of being dark, but there are some heartwarming moments between characters in the series.

Syou Fu Kan: It takes about a hundred years for the hole in space to completely close up. In the meantime, the sword needs to stay where it stands. A new job for the Seal Guardian who guard these holy grounds, in other words.
Tan Hi: Right!
Lin Setsu A: You're going to rebuild the holy grounds to keep another sword safe? Good grief... an exhausting notion.
Syou Fu Kan: You guys can do it though, right?
Ken San Un: (holding Tan Hi's hand) Yeah, leave it to us. Right?
Tan Hi: Yes.
Season 2
Episode 1: Xiān Zhèn Fortress

Film
Thunderbolt Fantasy: The Sword of Life and Death
"Hang in there, and live. Cry laugh, get mad, fall in love... And find something you really care about. That'll be your real life, and not an imitation. And when you're found that stuff, I'm sure you'll finally be able to let go of that nasty skull mask. And while you're at it, you can put aside the name of Syou Fu Kan, too."