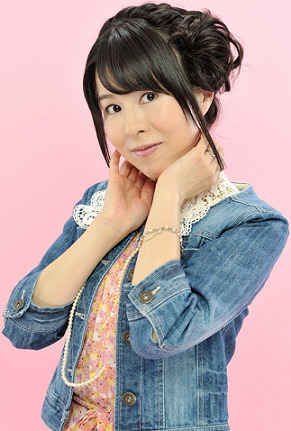 PADORU PADORU!
Oh description that conceals information, reveal your true nature to me! By my power, I command you, RELEASE!
Advertisement:

Sakura Tange (丹下 桜), born March 24, 1973, is a seiyu and singer that is most remembered as Sakura in Cardcaptor Sakura. She also was the personality of the radio programs Motto! Tokimeki Memorial (broadcasted from April 1995 to March 1996) and CLUB Tokimeki Memorial (broadcasted from April 1997 to March 1998). She retired from voice-acting in 2000 to concentrate on her musical career, and suddenly returned in 2009 doing mostly minor roles. In The New '10s, she shot back up in popularity due to three roles: Chloe Lemaire from Girl Friend BETA, Cagliostro from Granblue Fantasy, and Red Saber in the Fate franchise, which is probably her best-known and most popular role outside of Sakura Kinomoto these days. She has remained a voice acting staple ever since, voicing a huge number of beloved characters in games and shows in the 2010s and beyond.

Umu! This is a good description!
Now you can be sure everything will be alright!