A list of the major characters from the French indie RPG OFF.

Warning- due to the nature of the game and its many twists, all spoilers will be UNMARKED.

The Batter and his companions

A man in a baseball uniform who wishes to purge evil spirits called Spectres from the Zones. He'll stop at nothing to accomplish his goal... and we do mean nothing.

You, the player, are a distinct character in this story, viewed as a mysterious entity controlling the Batter. Nearly all possible mentions of what happens are spoilers due to the very nature of the story.

The extra party members of the game, named Alpha, Omega, and Epsilon.

Voiced by: John Vattic
"Nevertheless, I will introduce myself. I am the Judge, and I am aching to know your name, dear elusory interlocutor."

A talking cat with a huge grin on his face. He likes to talk in big words and helps the Batter by giving him hints. He is the Guardian of Zone 0, confirmed by Word of God.

In general
The three beings who oversee the Zones for the Queen. Though once noble leaders who wanted to create a new world of happiness and prosperity, because of the stresses of managing the people, they have long since lost sight of their original goals and have turned into tyrants oppressing the populace.
Dedan

Voiced by: Meh
"I command you. Fuck off this instant, if you want to keep your job."

The Guardian of Zone 1. He's an incredible jerk with a foul mouth that pushes the Elsens around and even sends a few death threats the Batter's way.

"Crave my pardon immediately, or I will send you back to limbo this instant."

The Guardian of Zone 2, who built a big city for his people to live in. He used to be a Nice Guy, known for his generosity... but then he went mad. 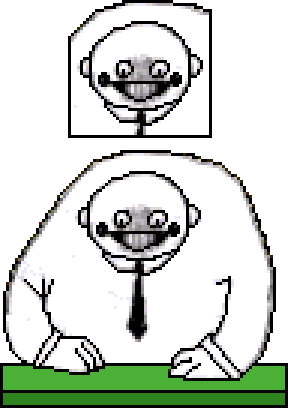 Voiced by: Mortis Ghost
"Yaaaahahaha!!! In the shadow of death valley you shall fear the apostle of darkness!"

The huge Guardian of Zone 3. He runs a sugar factory where everybody has a job. But he sure as hell isn't going to tell his employees what that sugar is made out of...

Enoch: The people were happy, before the phantoms came. Incidentally, I still don't understand why the dead won't just disappear anymore.

The enemies of the game, who haunt the Zones for unknown reasons. It is suggested in some parts of the game that they might be under the control of the Queen herself, but that is never proven one way or the other.

Voiced by: Aureden
"I am gravely disappointed."

A mysterious woman who rules over all of the Zones. Though you hear a little bit about her throughout the game, you don't find out who she is until the end. She, like the Batter, has three Add-Ons of her own: Delta, Sigma, and Ipsilon.

Mysterious enemies that only appear in purified zones. They are "demonical, humanoid spirits", and some of the toughest enemies you'll encounter in the game.

The NPC race that appears in all of the Zones, usually dressed in business attire, sometimes in helmets and labcoats. They turn into Burnt when they are highly stressed.

Burnt
The things that Elsen turn into when stressed. Always victims of some kind of body horror.
Elsen
The Elsen, the scientist who treated Hugo's illness and after whom a railway station is named.

Voiced by: Duf
"But enough blether. I'm not one of those protagonists you need to listen to for hours. So, lemme see the color of your credits."

A traveling merchant who provides the Batter with goods. His items change depending on where he is, so make sure you check with him often. He also briefly takes over the Judge's job in Zone 3, when the Judge has his Heroic BSoD.

The Judge's brother, another cat. Normally wanders around Zone 2.

A mysterious little boy in an undisclosed location. He doesn't seem to be in very good health. Just who is he?

A strange girl hiding in a basement with piles and piles of sugar under Zone 0. She can only be found if you manage to find the Grand Finale item in purified Zone 1.

"Everything happened just as we've forseen!"

Only seen in the secret ending, a race of sapient simians who were waiting patiently for the Guardians and the Queen to be defeated and the Zones to be erased. Now that the world is empty, they have a place to build their robot factories and win the war against the flying brains.