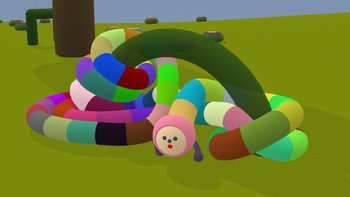 Don't think too hard trying to make sense of all this.
Advertisement:

NOBY NOBY BOY (all caps...always all caps) is...hard to describe, really. It's a Play Station Network game from the creator of the Katamari Damacy series, and definitely skews toward the "weird" end of the concept scale.

You are a BOY, a caterpillar-like creature that can stretch to near-infinite length and consume almost anything in its path. He is controlled with both analog sticks - the left one moves his front, and the right one controls his rear. Pushing them in opposite directions causes the BOY to stretch out. The shoulder buttons control actions such as jumping, floating, eating things and shooting them out from his backside (these objects will reappear completely unharmed). Eventually, when you've grown long enough, you can fly back into the sky and add your length to GIRL, your much larger Distaff Counterpart. The overall goal is to make GIRL long. No specific or even general length is given, however stretching GIRL eventually unlocks new planets and new levels. The developers created milestones for GIRL's stretching using actual astronomical data, and over the course of almost seven years, players on the PSN have stretched GIRL as far as to Pluto and back.

There are no time limits, and there is no overall "win condition"... it's just you, your BOY, and hundreds of objects/people waiting to be eaten by (or hitch piggyback rides on) you.