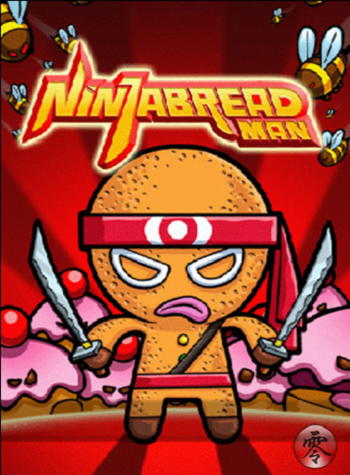 Ninjabread Man is an Action-Adventure and Platform Game, created by Data Design Interactive for the PS2, PC in 2005, and then ported for Wii in 2007. After nearly being eaten by a foxy fox in the original story, The Gingerbread Man decides to learn self-defense. Now he's willing to kick butt as The Ninjabread Man, slashing baked enemies with his sword as he tries to learn more powerful moves.
Advertisement:

Although the PS2 version never came to America, the Wii version was negatively received for its poor controls and low amount of content. A Europe-only sequel was announced, but it appears work on it never got off the ground, and given that DDI disappeared in 2009, it's likely that the sequel is dead.