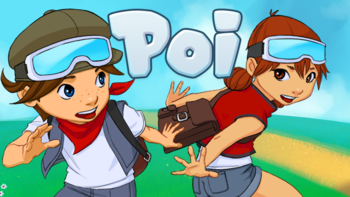 You're two kids on an adventure out to unravel the mysteries of the Milky Way Globe to become a master explorer.

That's it. Have fun!

Poi plays like many 3D platformers of yore with all of the trappings. You can choose between the boy or girl character as they explore many exotic locations and worlds, fending off comical enemies and complete unique platforming challenges.

A special version of the game Poi: Explorer Edition was released for the Nintendo Switch in 2017. With many added extra features like a digital artbook, and extra costumes for your character as well as Joycon controls.