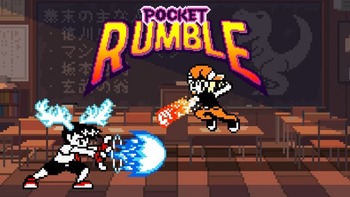 Pocket Rumble is a 2D Fighting Game for Steam and the Nintendo Switch developed by Cardboard Robot Games. This game is majorly inspired by SNK fighters on the Neo Geo Pocket. The control scheme involves the standard movements and two attack buttons: Light and Heavy. Each character has their own special moves and abilities that can be used to their advantage.