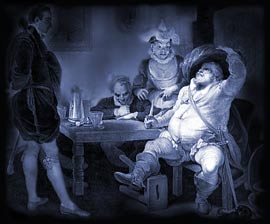 "And like bright metal on a sullen ground,
My reformation, glittering o'er my fault,
Shall show more goodly and attract more eyes
Than that which hath no foil to set it off."
— Hal, I.ii
Advertisement:

A history play by William Shakespeare. It is the first in a duology, the second being Henry IV, Part 2. It actually also relates to two other Shakespearean plays— Richard II (which it follows) and Henry V (which it precedes).

Following the events in Richard II, Henry Bolingroke, now King Henry IV, wishes to wage a crusade to cleanse himself of the sin of Richard's death. It is not to be, as some of his former allies plot to overthrow him— chief among them the Percy family, whose son Harry (known as "Hotspur") is one of the greatest warriors in England.

Looming war isn't King Henry's only problem, though. His son, Prince Harry (known as "Hal"), is a seeming good-for-nothing lout who surrounds himself with drunkards and rogues and rejects the royal life, preferring to play pranks and chase women. Hal's best friend is the old, fat, wily Sir John Falstaff, a bombastic drunk who provides much of the play's comedy.

As King Henry and the Percy family wage a tense political battle, Hal and Falstaff get themselves into a number of comic situations. It is during one of these that Hal reveals his plot to the audience — he is playing the part of the foolish prince so that people will not expect much of him; that way, when he finally reveals himself as the great thinker and fighter he is, he will look much better by comparison.

Eventually, the political tensions come to a head and the two sides face off in the Battle of Shrewsbury. Hotspur leads his forces boldly into fray; Hal swears his loyalty and love to his father and joins the fight; Henry IV has a number of his soldiers dress as him to confuse the enemy; and Falstaff reaps profit from draft dodgers. At last, Hal and Hotspur meet in single combat, and Hal prevails.

The play winds down with another comic scene with Falstaff (who tries to convince Hal he killed Hotspur), King Henry orders his enemies executed, and Hal generously pardons one of the soldiers from the opposing side. But wait! All is not well. The Archbishop of York and the Earl of Northumberland, along with a number of other nobles, have joined forces and still plot against Henry IV and Hal. To Be Continued in Henry IV, Part 2.

A perennially popular play, this has been adapted to film many times. Orson Welles' experimental Chimes at Midnight combines the two parts with bits from Henry V and The Merry Wives of Windsor, without changing any lines, the action now centering on Falstaff instead of Prince Hal. In 2010, a production of Henry IV at The Globe was filmed for DVD with Roger Allam as Falstaff and Jamie Parker as Hal. Allam won an Olivier Award for his performance. In 2012, it was the second production in the BBC's four-part series The Hollow Crown, with Jeremy Irons as Henry, Tom Hiddleston as Hal, Simon Russell Beale as Falstaff, and Joe Armstrong as Hotspur.