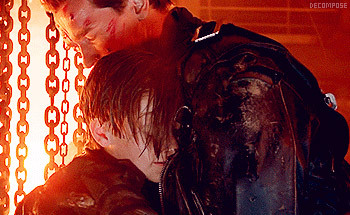 "I know now why you cry... but it's something I can never do."
"Trunks... from the time you were a little baby, I've never once hugged you because I always wanted to make you a tougher man. I'll hug you, now."
— Vegeta, Dragon Ball Z Kai
Advertisement:

Some characters (and some real people) consider the very natural act of a father showing his love for his children to be un-manly and anathema. They so habitually maintain their stoic badass attitudes they never tell their children they love them or hug them, not till their dying hour.

Heroes or antiheroes who enact this trope have lived their entire lives true to the notion that emotion is weakness, still loving their children but never even saying so.

Yet, at the moment of death, such a father might find that his pride seems immaterial and insignificant compared to the crying child before him. Deciding that it's not worth it to go to his grave honorably with regret for it, he dissolves into the long overdue personification of love for the first and last time before facing the final journey.

The source of many Tear Jerker endings. Doing this means usually also to Go Out with a Smile. See also Last Kiss, Real Men Hate Affection, and Fond Memories That Could Have Been.