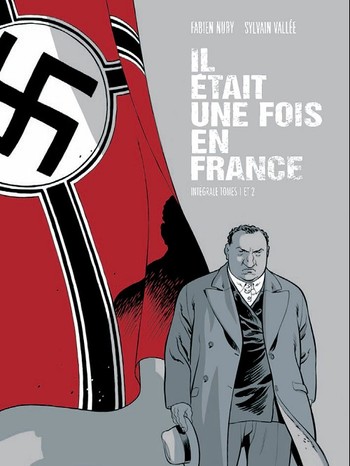 A criminal for some, a hero for others... Joseph Joanovici was all that, and more.
Advertisement:

Il était une fois en France (Once Upon A Time In France) is a French comic book written by Fabien Nury and drawn by Sylvain Vallée published from 2007 to 2012 in six volumes. It is a Very Loosely Based on a True Story historical thriller centered around the life of Real Life figure Joseph Joanovici

. The comic was a commercial and critical success, gathering several distinctions and selling more than 1 million volumes in France.

In 1925, Joseph Joanovici is a penniless Romanian Jew who has just emigrated in France. Joseph doesn't even know how to read but through cunning, expertise on metal and dishonesty, and with the help of his loyal brother Mordhar and secretary Lucie Schmidt, Joseph goes from scrap merchant to biggest supplier of iron in France, just in time for World War II. As the Germans invade and occupate France, Joseph realises that to survive as a Jew under Nazi rule, he has to make himself useful and actively collaborates with the Germans to supply them with French iron. But at the same time, predicting that the Allies will eventually win, he'll need to have a solid reputation, so he supplies and assists La Résistance too, notably the resistance ring "Honneur et Police". This double dealing proves difficult to maintain, and one night, he is forced to betray Honneur et Police. Joseph uses one young man, Robert Scaffa, as a scapegoat and assassinates him to silence him. When the war ends, Joseph is hailed as a war hero.

However in 1946, Robert Scaffa's mother draws attention to Robert's murder, and the local judge Jacques Legentil, feeling personally invested in the case, spends the next few decades trying to bring Joseph to justice. However, Joseph is a powerful man and harasses Legentil in order to stop him. As time passes, this case degenerates into a personal feud between the two, and the lives of both are ruined because of the other. By 1965, Joseph is discredited, ruined and lives in constant fear of Legentil, while Legentil is a lone old man separated from his family and obsessed by Joseph. The night of February 6th 1965, Joseph dies and Legentil is here to witness an ambulance take him away.