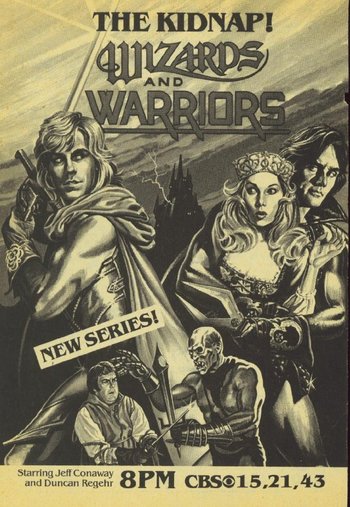 Wizards and Warriors is a CBS television series from 1983.

Welcome to the magical continent of Aparens, which is currently divided into two warring realms; in the south we have Camarand, home of goodness and truth, and in the north, the darksome land of Karteia. Guess which side we are supposed to be rooting for.

Unfortunately, though Prince Erik Greystone, champion of Camarand, is golden haired and usually dressed in golden lame, his opposite number the villainous Prince Dirk Blackpool is dark, sultry and dresses in black leather with studs. Seldom has evil looked so delicious.

Prince Erik's allies include the great wizard Traquill and Erik's faithful squire Marko, who is not only tremendously strong but can talk to animals. It's a gift - from his godfather Traquill. And then there is Belladona. Beautiful, scantily dressed Belladona that nobody but Erik can see and hear but who pops up regularly with delphic utterances that are less than helpful - not that Erik cares. And then there's Erik's betrothed, the airheaded princess Ariel Baaldorf. Her father, the noble King Baaldorf (Camarand has multiple monarchs) loyally supports Erik in his battle against evil but has far closer ties to wicked Prince Dirk than one would expect.

On the other side luscious Prince Blackpool has his own wizard, Vector, who does NOT wear a hat. And sultry sorceress Bethel who wants to be Queen of Aparens, though magic and royal blood are NOT supposed to mix. She and Dirk prefer to regard this particular rule as a guideline.

Recurring characters include Prince Blackpool's hopeless younger brother Geoffrey, who has a thing for Ariel who has a thing for Dirk (get in line your highness!). Erik is also afflicted with a brother, the decidedly anti-heroic Prince Justin Greystone who resignedly comes to his brother's assistance when he absolutely has to. Ariel has a long suffering handmaiden, Cassandra, who is required to wear a stupid hat. And the princess clearly inherited her lack of intelligence from her mother Queen Lattinia Baaldorf. And then there are the well known Winslow sisters - very well known, it is rumored, to Prince Justin.

This was a "summer" replacement series (actually early Spring 1983) and only eight episodes were run. Most of them were directed by Bill Bixby.

NOT to be confused with the video game series.