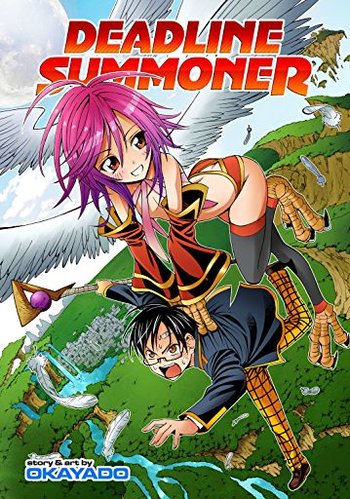 "This is not the fantasy I dreamed of...!"
Advertisement:

Deadline Summoner (Shisen no Shoukanshi) is a one-shot manga by Pixiv artist Takemaru "Okayado" Inui, chronicling the adventures of Mamoru Onodera, an Otaku sucked into a fantasy RPG, and his harem of monster girls. It was first published in Dragon Age in 2012, and is licensed in English by Seven Seas Entertainment.

The plot of its one and only chapter follows Mamoru and his current traveling partner, Aero the Harpy, as he tries to find a job that pays well and keeps him WELL out of harm's way. Complicating this is the lack of boring, safe jobs in a fantasy universe, and he's on a Perma-Death, No-Potion run whether he likes it or not. And as if that wasn't bad enough, his summons are EXTREMELY intent on sleeping with him and not too keen on sharing with the others.

For Okayado's other works, see Monster Musume and 12 Beast.