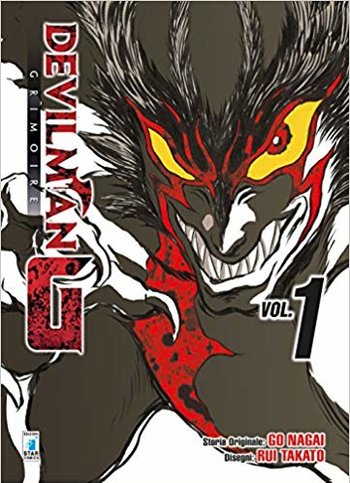 A Different Devilman Story That You Haven't Heard Before

Devilman G デビルマンG (グリモワール) (also known as Devilman Grimoire) is a manga written and drawn by Takato Rui for the 40th anniversary of Devilman to introduce younger generations to the franchise with a completely fresh tale from the original format. For that reason familiar elements like Ryo Asuka (Satan) and his relationships with the main cast have been completely erased to show what Akira Fudo really is as a human compared to Amon.

It was published in the magazine Champion Red running from May 2012 to January 2014 issues, although Rui may continue the story at a later date. It incorporates a large amount of its themes from the original Manga and TV series, however characters and other points from many other manga are present too.

The series was completed in 5 volumes (coincidentally with the number of volumes of the original 1972's manga). In 2017, Seven Seas Entertainment acquired the license for the series and launched the first volume on October 17, 2017.

In the dark streets of Tokyo, things have slowly but surely begun following the law of jungle where the strong devour the weak. This was revealed to be because demons have been appearing taking over humans. A school girl named Miki Makimura is a self-proclaimed witch who is helped by her childhood friend Akira Fudo in her exploits. When one of her rituals gets interrupted by demons, Akira is horribly injured and with his consciousness fading, his body is hijacked by the demon hero Amon. Afterwards the demon tribes begin to move in for a turf war to control the world. With much of their activity, people with pure hearts and strong wills become Devilmen continuing to fight against the Demons until they are the only party is left standing.