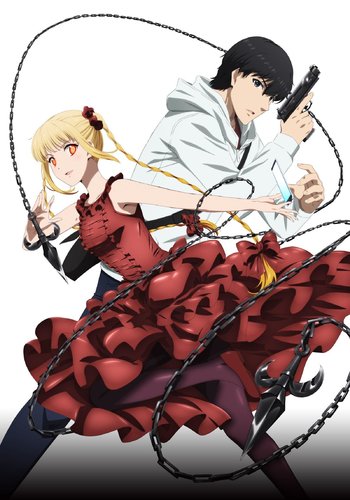 The player "Kyoda" is asking for your help!! You should join Darwin's Game and help your friend!!
Advertisement:

Kaname Sudo is just another Ordinary High-School Student, but one day receives an invite from his friend to join the Darwin's Game, which is apparently a survival game played on one's phone. Kaname accepts, completely disregarding the fact that his teacher just told him that his friend—the sender of the invite—has apparently gone missing. The moment he does, a snake leaps out of the phone and bites him in the neck before vanishing. However, he was the only one able to see the snake, and he immediately collapses before he can say anything more.

As you'd expect, Kaname soon finds himself targeted by the Ax-Crazy contestants of the game, all of whom are out to kill each other in order to win. Now Kaname must fight for survival and search for the truth behind Darwin's Game, or die trying.

A shounen manga drawn and written by the two-man team FLIPFLOPs, the manga began serialization in Bessatsu Shonen Champion in 2012 and is still ongoing.

An Animated Adaptation by studio Nexus under director Yoshinobu Tokumoto premiered on January 3, 2020. Aniplex USA has licensed the series with a simuldub being provided by Funimation.

Has a light novel interquel, Flag Game, that details the Sunset Ravens' Clan Wars in Shibuya between the events of the Treasure Hunt Game and the Hunting Island Game and shows Shuka Karino's quest for revenge on her parents' killer.

Beware of spoilers, some of which are unmarked Late Arrival Spoilers.