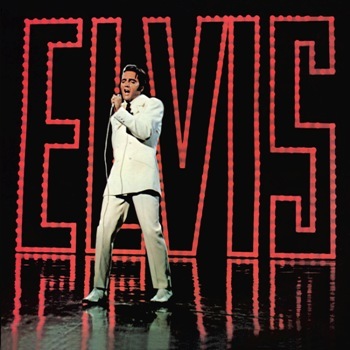 Elvis is the debut live album by Elvis Presley, released in 1968. It is often nicknamed Elvis NBC TV Special, for there are two other albums by him with the same title. It's the soundtrack for the NBC special Singer Presents...Elvisnote Singer as in Singer Corporation, the sewing machine manufacturer, which premiered on December 3, 1968.

By the end of The '60s Elvis' career was pretty much in a slump. For most of the decade he had appeared in rather bad Hollywood films and released hit singles that were a watered down version of everything that originally made Elvis great. Many young people felt he had lost "it". In an attempt to revive Elvis' career he shot this special at the NBC Studios in Burbank, California in June of 1968. It was a mix of live performances and production numbers.

It proved to be a huge media spectacle. Not only was this his first live concert since 1961, but it showed Elvis could still rock the crowd and reminded the world why he was such a Rock & Roll superstar. He was very enthusiastic about the concept and it really shows from his energetic performance. Although it sometimes shows him perform with a backing band and background dancers, most of the concert is a one-man special.

The special was a major triumph, attracting 42% of the American viewing audience when it debuted, making it the single highest-rated program of the 1968-69 network TV season. The show convinced many that Elvis was still the "king" and revitalized his career. Many music fans see it as his finest last hour before his Las Vegas period (which in many ways followed the template laid down by this show) set in and the quality of his concerts seriously went down the drain, not to mention his dignity.

Because of the way it revived his career, the show is almost always called The '68 Comeback Special.

Where Could I Trope But To The Lord?