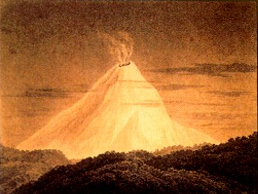 A volcano is not a mountain like others.
Advertisement:

A 1998 novel in verse by Anne Carson. It tells the story of Geryon, a boy who is red, has wings, has a whirlwind teenage romance (and miserable breakup) with a guy named Herakles, becomes a photographer, and travels to South America where he runs into Herakles and Herakles' new lover, Ancash. From Ancash, Geryon learns why he is red and has wings. (It involves him being a Chosen One. Kind of.)

Geryon and Herakles are, of course, originally from Classical Mythology, where Geryon is the giant, monstrous keeper of a herd of red cattle. Herakles steals the cattle — killing Geryon in the process — as one of his labors. Carson brings up that version of the story in some prefatory matter concerning the poet Stesichoros, who wrote the first sympathetic portrayal of Geryon in the sixth century BCE. This section of the book also discusses a separate story about Stesichoros: he is supposed to have been struck blind by Helen for insulting her in a poem, then had his sight restored after writing a palinode.

Autobiography of Red was followed in 2013 by a Denser and Wackier (but also somewhat darker) sequel, Red Doc>.

Autobiography of Red provides examples of: