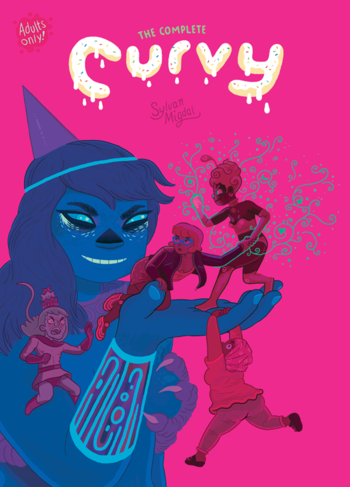 "Spacetime is Curvy."
— From Anaïs' notes for her Physics class
Advertisement:

is a Webcomic by Sylvan Migdal, under the pseudonym of "M. Magdalene" (though all his other works are linked from the Curvy page). It updates weekly on Saturdays. The comic is way too NSFW to link.

Anaïs Phalèse is an Ordinary High-School Student, who plays softball and worries about passing her Physics class. One day she meets Fauna Lokjom, Despoina (Princess) of Candy World. Anaïs helps Fauna flee from the bad guys who are chasing her. They flee from reality to reality. They are chased by the minions of Prince Boglox of Stupid World, and by Fervid Wexler, a Federal Agent who believes that Anaïs and Fauna are terrorists.

On October 13, 2017, Curvy ended its run, after over 13 years in production. It missed almost no updates during that entire span.