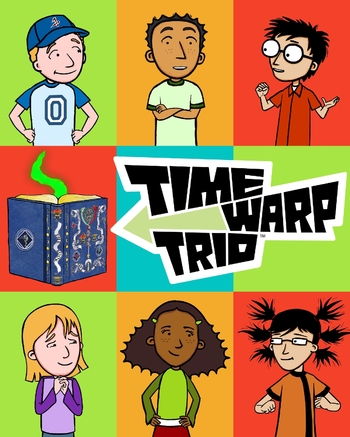 A 2005 Discovery Kids series, co-produced with WGBH Boston, based off the book series of the same name by award-winning children's author Jon Scieszka (also known for The True Story of the Three Little Pigs and The Stinky Cheese Man).

The show mainly focuses around ordinary kid 10-year-old Joe, who, on his birthday, is given a mysterious book by his magician uncle who he was named after. This book, simply called "The Book", uses Time Travel to send Joe and his best friends, Sam and Fred, to the time of Blackbeard. They get out okay, but more time travel ensues. They soon travel to 2105, where they meet their own great-granddaughters named after them: Jodie, Samantha, and Freddi. Soon, the six of them go on time-warping adventures-usually three an episode, mix and match- and are sometimes joined by Joe's little sister Anna.

It ran 26 episodes from 2005 to 2006. Despite a second season being ordered and it briefly being moved to a new and more appropriate time slot, said second season never made it to air.

If you're looking for the original books, go HERE.