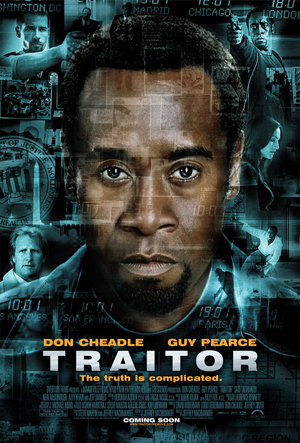 Samir Horn (Don Cheadle) was a Sudanese-born United States citizen who, after watching his father die in a car bombing when he was only twelve years old, went on to become an international Arms Dealer who specializes in selling explosives to terrorist organizations. While on business Samir meets a man named Omar (Saïd Taghmaoui), the leader of a small terror cell in Yemen, whom Samir offers to provide equipment and training so that his men, in Samir's words, "won't blow themselves up... unintentionally, that is."

Their meeting is interrupted when a squadron of local soldiers, led by FBI agents Roy Clayton (Guy Pearce) and Max Archer (Neal McDonough) assault Omar's compound and capture both Omar and Samir. After the FBI agent's unsuccessful attempt to persuade Samir to provide information on his clients in exchange for his freedom, the pair are left to rot in a Yemeni prison. Impressed by Samir's loyalty and devotion to the Islamic faith, Omar offers him a position in his group, and soon after they both escape the prison compound and flee the country.

Months later, when the bombing of a U.S. consulate building in France is linked to Samir, the FBI scrambles to dig up as much information as they can on the enigmatic man. Clayton and Archer travel the globe in an attempt to retrace his footsteps and to try to understand just what would motivate a man whose father was murdered by terrorists to join their cause and, more urgently, where the next bombing will occur.

Traitor was directed by Jeff Nachmanoff, and produced and co-written by Steve Martin. Distributed by Paramount Pictures, the film was released in August of 2008.