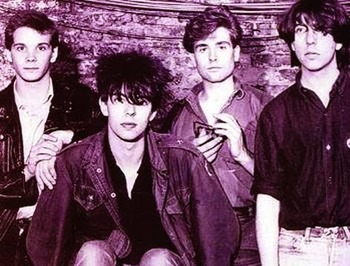 The band's classic lineupnote From L-R: Pete de Freitas (drums), Ian McCulloch (vocals), Lee Pattinson (bass), Will Sergeant (guitar)
"Bring on the dancing horses
Wherever they may roam
Shiver and say the words
Of every lie you've heard"
— "Bring on the Dancing Horses"
Advertisement:

Echo & the Bunnymen are a Post-Punk Psychedelic Rock band from Liverpool, England. They were part of the Neo-Psychedelic scene in Liverpool before breaking out in The '80s with popular albums and singles like Crocodiles and "The Cutter", reaching their peak in 1984 with Ocean Rain. Singer Ian McCulloch left the band in 1988 to start a solo career, and after the death of drummer Pete de Freitas and a brief reformation with Irish singer Noel Burke, McCulloch and guitarist Will Sergeant reformed in 1997. The band are currently still performing and recording, with their Revolving Door Band lineup always centered around McCulloch and Sergeant.