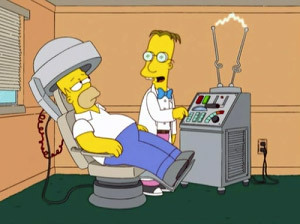 Homer wakes up in the snow with no memory of the night before. When he comes home, he finds that his family is missing, Chief Wiggum came over due to a domestic disturbance, and Moe gave Homer a drink called "The Forget-Me Shot", which causes memory loss and is only drunk by people who have a bad memory they want erased.