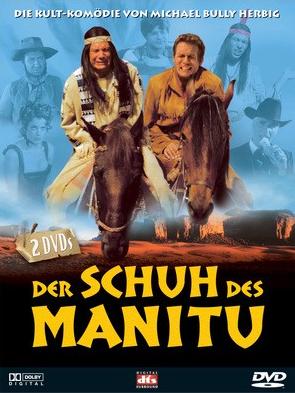 Der Schuh des Manitu (The Shoe of Manitou) is a German western comedy released in 2001 and one of the most successful German films of all time.

The story revolves around Apache chief Abahachi and his white blood brother, Ranger. After being conned by Santa Maria, "a real estate agent from Wyoming", who sold them a saloon that consisted only of a front wall, a firefight ensues. Not only does Santa Maria escape, but also Fake Hare ("Falscher Hase", a type of meat loaf), the son of the chief of the Shoshones is killed, who just happened to deliver the "Shoshone Loan". Being framed for his death by Santa Maria, Abahachi and Ranger have to escape from Shoshone captivity to prove their innocence and find a way to repay the loan to chief 'Sly Lizard'.

Abahachi remembers that he owns a treasure, which he inherited from his grandfather Gray Starling ("Grauer Star", meaning cataract, the eye disease). Unfortunately his grandfather raised him very well and tought him to share with others, so he divided the Treasure Map and shared it with his teenage friends. And so, Abahachi has to seek out and reunite the friends of his salad days — his own Camp Gay twin brother Winnetouch, the Greek Dimitri and his childhood sweetheart Uschi — and lead them on in a race against time to salvage the treasure before Santa Maria and his gang of bandits get there.

Der Schuh des Manitu is based on a series of short skits from the comedy show Bullyparade; its style is quite similar to many of Mel Brooks parodies, like Spaceballs, Robin Hood: Men in Tights, or (more to the point) Blazing Saddles. It is ultimately a spoof of the western novels by German writer Karl May and their movie adaptations, the Winnetou films of the 60s, which are immensely popular in Germany.

Being a parody, the whole movie is practically made from tropes.

There are two English dubs: one is by the original actors, but it suffered from trying to preserve accent gags that worked in German but didn't in English. The other is more of a Woolseyism that adds even more anachronistic slang (Ranger and Abahachi's catchphrase is now "Wassup?!") and translates the Punny Names fairly well (the son of the Shoshone chief is now called Sonny Rabbit).There's also a stage musical that's been out for a while.