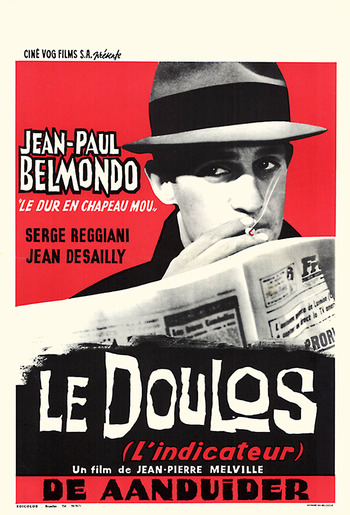 Le Doulos is a 1963 crime drama from France, directed by Jean-Pierre Melville, one of the products of the French New Wave.

A criminal named Maurice is released from prison after serving a six-year sentence for robbery. Being a criminal, he immediately starts planning his next caper, namely stealing everything inside a rich guy's safe. He stays the night with a girlfriend, Therese, before meeting his partner, Remy, and another crook named Silien (Jean-Paul Belmondo). Silien delivers a bag of burglary and safe-cracking tools, leaves, and places a phone call to Inspector Salignari of the police.

Maurice and Remy leave for the robbery. Silien catches Therese alone in her apartment, and beats her until she is forced to tell him where the robbery is to take place. Maurice and Remy grab the rich guy outside of his mansion, frogmarch him back inside, and are about to start opening the safe when the cops show up. They run, and there's a shootout. Both Remy and Inspector Salignari are killed. Maurice, winged in the shoulder by a bullet, passes out on the street. He winds up at the home of a friend and fellow crook named Jean, without knowing how he got there. Maurice blames Silien for ratting him and Remy out to the cops, and swears vengeance—but all is not as it seems.