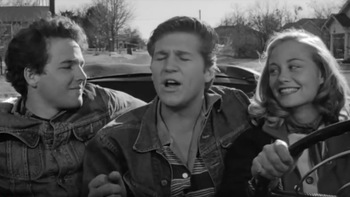 The Last Picture Show is a 1971 American drama film directed by Peter Bogdanovich, adapted from a semi-autobiographical 1966 novel of the same name by Larry McMurtry (with a screenplay by McMurtry and Bogdanovich).

The film is set in Anarene, a tiny town on the north Texas plains, between November 1951 and October 1952 (the town is called Thalia in the novel). Sonny Crawford (Timothy Bottoms) is a high school senior, and leads a typical life for a teenage boy in his town: he plays on the school football team, goes to movies at the town's only theater, which, along with the town pool hall, is run by Sam the Lion (Ben Johnson), and pursues relationships with girls, accompanied by his best friend Duane Jackson (Jeff Bridges), the charismatic captain of the football team. Duane is currently dating Jacy Farrow (Cybill Shepherd in her film debut), the school's homecoming queen, who is fiercely protected by her mother Lois (Ellen Burstyn) as she grooms her for adulthood.

But as Anarene's young people get ready to become adults, the town's adults lead unhappy lives, filled with bad marriages and affairs. Sonny gets drawn into this when he falls in love with Ruth Popper (Cloris Leachman), the shy wife of the school's athletic coach. Meanwhile, the Jacy/Duane relationship gets strained and Jacy and Sonny start seeing each other, which naturally puts a wedge between Sonny and Duane. But as life goes on the people of Anarene must learn to cope with unexpected losses and sweeping changes to their world.

With a stellar cast that also included Eileen Brennan, Clu Gulager, Randy Quaid (in his film debut), and John Hillerman, it was shot in black and white for aesthetic and technical reasons, which was unusual for its time.

Bogdanovich and most of the cast reunited for the sequel Texasville in 1990.