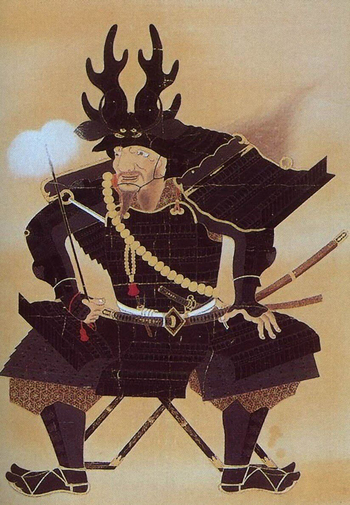 Those who saw that antler helmet were due for an ass-kicking.
Advertisement:

(March 17, 1548 – December 3, 1610) was one of the most trusted generals of Tokugawa Ieyasu, and also one of the greatest warriors of all the Jidaigeki.

Born in Mikawa Province, Tadakatsu loyally served the Tokugawa clan and Ieyasu, who rewarded him with the fief of Kuwana for his service. He was the pride and joy of the Tokugawa clan, and many famous daimyo like Oda Nobunaga, Toyotomi Hideyoshi and Takeda Shingen openly praised his skills. This is especially notable because Shingen was his master Ieyasu's bitter enemy, and Nobunaga himself was notoriously very thrifty with praise. However, after the victory of Sekigahara, he slowly became estranged from the shogunate as it moved from a military to a civilian and political institution.

In his prime, Tadakatsu was known as "The Warrior who Surpassed Death Itself", as he fought more than 100 battles without suffering any major injuries. He wore a set of Buddhist prayer beads over his armor and a helm decorated with stag antlers, (according to a legend, one day he managed to evade his enemies by following a deer across a hidden ford in a river, and as a form of gratitude he put antlers on his helmet). During the Komaki campaign (where Hideyoshi and Ieyasu struggled for dominance) he managed to cover his lord's escape by rallying a small group of soldiers and firmly planting himself opposite the river the much larger Toyotomi army would have to cross. He then issued a challenge for the enemy to cross and face him. The act was so impressive that Hideyoshi himself ordered that no harm come on Tadakatsu or his men.

He was considered a great boon for Ieyasu, with Shingen claiming so and stating that, if it wasn't for Tadakatsu, Ieyasu would've bitten the dust very quickly (Tadakatsu had also served as rearguard during Ieyasu's escape following a crushing defeat Mikatagahara). His daughter Komatsuhime, who was apparently just as intimidating as her father, was adopted by Ieyasu as his goddaughter and eventually married into the Sanada clan (becoming a sister-in-law of Sanada Yukimura). Aside of that, he's counted as one of the four great generals of the Tokugawa, the Tokugawa Shi-Tennou, with other members Ii Naomasa, Tadatsugu Sakai and Sakakibara Yasumasa.

His weapon of choice was a deadly spear called Tonbogiri. The name means "Dragonfly Cutter", since it was said that a dragonfly which landed on the blade would be sliced in half. The spear itself is considered one of the Great Spears of Japan, a national treasure.

All these facts should make you understand why he's almost always depicted as a top quality badass and a legendary warrior.