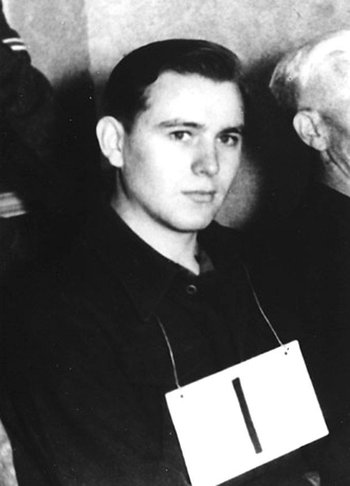 The deadliest chimney sweep in history
What drove Willi Herold to do what he did?
Of course, the answer had to be composed of many individual components, although perhaps neither as profound nor as simplistic as some pseudo-scientific sociologists would like us to believe. Mentally and morally, he wasn't quite put together, but in those days that was true of many people of all ages. From a legal point of view, he was sane: he knew what he was doing and that it was wrong. He was a product of his time and had seized the opportunity offered to him under wholly exceptional circumstances. He had personality and charm, but not the appropriate character. [...] Basically, for him, it was the biggest and greatest Cowboys and Indians game of his life, only with live ammunition on real people. A terrible shame. Under more fortunate circumstances, he would have made a damn good officer.
— Theodore X.H. Pantcheff, British officer and interrogator in Herold's case
Advertisement:

The young man at the heart of the deadliest masquerade of World War II, Willi Paul Herold was born on September 11, 1925, in Lunzenau, a small village in Saxony, Germany. The son of a roofer, he grew up in a middle-class family of comfortable means. A well-built, good-looking boy, always well-groomed, he proved to be highly individualistic and ambitious, a natural-born leader, although somewhat of a fibber and a risk-taker.

He joined the Jungvolk at the age of ten in 1935, but was kicked out the next year because he kept skipping exercises and organized his own "pack" of boys, which was against the rules. At fourteen, he joined the Hitler Youth and for a while he was enthusiastic about them, thanks to the long nature hikes they took him on and the other advantages they offered. At the age of fifteen, he began an apprenticeship as a chimney sweep, from which he eventually ran away because (according to him) he didn't feel like working and wanted to emigrate to America. He was arrested by the Gestapo, held for a week and given a good beating, after which he was picked up by his father, who also applied the same treatment. This correction seems to have had the desired effect, as he completed his apprenticeship in 1943.

From June until September 1943, he fulfilled his Reich Labour Service in France, on the Atlantic Wall, and three weeks after his eighteenth birthday he was drafted into the army and sent to Tangermünde, where thanks to his above average physical fitness he was trained as a paratrooper. He underwent three months of infantry training and a sixteen day parachute course, and his division was the last to receive near full paratrooper training. In the early months of 1944, he took part in the battles at Nettuno and Monte Cassino, where he was promoted to Private First Class. He was wounded during combat when a bullet pierced his lung, but recovered well. According to him, he received the following medals for destroying two British tanks on the shores of Salerno: Iron Cross 1st and 2nd Class, Silver Close Combat Clasp, Silver Purple Heart, Parachutist Badge and Infantry Badge. During his first leave home, he was always in uniform and raised eyebrows by displaying his medals; the people in his hometown doubted he had the right to wear them, as it would have been very difficult for someone so young to receive them. Whether he did indeed receive some of his more prestigious medals is unknown.

At the beginning of 1945, he was sent to the Western front. Upon their return from Holland, he got separated from his unit in a moment of chaos and found himself alone, walking on the long road between Gronau and Bentheim. A resilient survival artist, he didn't pass the chance to rummage through the trunks found in a shot up Wehrmacht vehicle lying in a ditch on the side of the road. Inside he found the pristine uniform of a highly decorated Luftwaffe Captain, which he immediately put on, eager to get out of his wet and dirty uniform. However, he did more than just put on the uniform for warmth - he also put on the persona of a Luftwaffe Captain, commanding and proud.

As he walked into Bentheim, he contacted a Major there and asked him about his unit. Additionally, he asked the major if he could have some soldiers to make up for his alleged "lost" ones. The major agreed, and gave him a few soldiers. As he moved from town to town, he was joined by several other lost soldiers, and his "combat troop" grew in size. Although his core group comprised of twelve people, about sixty others would join him temporarily, leaving when it suited them. Remarkably, for someone who claimed to have been on a special mission from the Führer, Herold was asked to identify himself only two times: the first time, while his soldiers were presenting their soldier IDs, he went to the side and began a conversation with the major who had requested the identification. The major's troops, not wanting to disturb their superior in the middle of a conversation with another officer, contented themselves with checking Herold's soldiers. The second time, he managed to weasel out of it by acting haughty and offended. His behavior was so confident and so much like that of a real officer that many people believed him to be a real captain. Those who had their doubts were too intimidated by the presence of his band (and by their savage willingness to murder) to voice them. Herold attempted to fight the enemy by joining the unit stationed in Lathen with his troop, but this effort remained unsuccessful and he ordered a retreat towards the Aschendorfermoor prisoner camp.

Up until his arrival in the Aschendorfer Moor camp, his little masquerade could have been considered entertaining, amusing even. It's here that things took a dark turn, as the local camp supervisor, Karl Schütte, suggested that perhaps Herold could help them out of the considerable pickle they were in: the camp was overpopulated, several prisoners had escaped and the neighboring civilians were complaining about them. Schütte was worried about the morale of the villagers, since the front lines were only a few miles away. Additionally, he was struggling to operate and control the severely overpopulated camp. Eager to rise up to the occasion, Herold suggested that the men be reintegrated into the army. After his suggestion was turned down by a skeptical Schütte, who described the overworked, malnourished and desperate prisoners as useless cowards, Herold decided to begin summarily executing them in a gruesome, bungled orgy of violence. Prisoners were beaten, made to perform exhausting exercises, and summarily executed without any trial, including through the use of an anti-aircraft gun.

After the camp was destroyed by Allied air raids on April 19th 1945, Herold and his remaining troop moved north, traveling from town to town and terrorizing the population. They hanged a farmer which had hoisted a white flag, withdrew five Dutchmen accused of espionage from a local prison, forced them to dig their own graves and executed them. In Leer, Herold visited the local prison and arranged the release of a wealthy baker in exchange for 10,000 Reichmarks, which he pocketed. They slept all day, partied all night and did a minimum of military exercises, such as standing guard. On April 30th, he and his men were arrested in a hotel in Aurich. On the 3rd of May 1945, he was put on trial by the Germans, but released thanks to a German higher up by the name of Urbanek, to the prosecutor's dismay. Herold was brought to a special battalion, where he was enthusiastically greeted, but from which he quickly deserted under the cover of night and headed over to the port city of Wilhelmshaven. He put together a soldier's paybook and discharge papers under his real name and began working as a chimney sweep.

In his statement, Herold would claim that after reaching Wilhelmshaven he straightened up, but confessed to buying some military decorations he had no right to wear, and was eventually arrested by the British after he was caught stealing a loaf of bread. The treatment he received in captivity was so poor that he could barely walk, and during one interrogation with a British intelligence officer, he was beaten so badly that he began bleeding uncontrollably and needed medical assistance. Initially unaware that they had captured a wanted criminal, the British eventually discovered his identity and put him on trial in 1946. Unlike his pale, blank co-defendants, Herold was notable for his unusually relaxed behavior during his trial. He looked around the courthouse smiling, took notes, made fun of the witnesses, and was described by his defense lawyer as loving the attention and interest he was getting. His behavior did not help his already doomed case, and he was sentenced to death together with six of his accomplices. They were beheaded three months later in the Wolfenbüttel prison by renowed executioner Friedrich Hehr. According to the lead interrogator Major Pantcheff, who was present at the execution, Herold showed courage and composure, in contrast to some of his other accomplices.

He was twenty one years old.

Over the years, there has been a great deal of speculation regarding Herold's motives and character. There was nothing to suggest that he was ideologically motivated, and he himself gave the following lackuster explanation: "I can't really say why I shot all those people. My only reason was that neither myself nor my men were enthusiastic about the war, and the shootings allowed us to avoid going back to the front." Worth noting however, is that he withdrew this statement during his trial and claimed it was made out of fear of further torture at the hands of his jailers. In contrast to the views expressed by Pantcheff in his famous book on the case, German historians have rejected the notion that Herold was a coward, and focused on the system which allowed him to perpetrate his crimes with impunity.