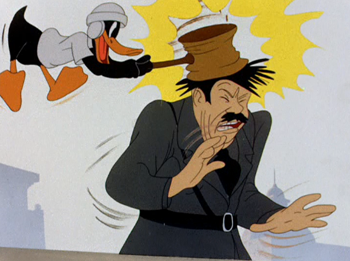 The term wartime cartoon refers primarily to cartoons made or released in The Golden Age of Animation during World War II and having some specific reference to the war effort. Many wartimes are explicit propaganda, while others make humorous jabs at conditions on the home front such as the rationing of fuels, materials, food products and consumer goods.

While some wartimes have remained popular as period pieces, many of these are now considered controversial due to the offensive caricatures of Germans and (especially) Japanese (see Those Wacky Nazis and Yellow Peril, respectively). Of course, with The Holocaust now common knowledge, it's interesting how the racial policies of the Nazis were relatively rarely dwelt upon in those cartoons. So imagine the shock of the general public when the Final Solution death camps were discovered and their realization that, no matter what awful things the Allied propaganda might have claimed about them up to then, Those Wacky Nazis were actually worse, with them committing acts of villainy that beggared the worst of nightmares.

open/close all folders
Disney
Famous Studios
Advertisement:
Tex Avery MGM Cartoons
Tom & Jerry
MGM Oneshots
Warner Bros.
Lots of Looney Tunes cartoons from that era had subtle jokes in them reflecting home-front conditions, even ones that don't overtly address the war. Gas rationing "A" cards were common, as were jokes about scrap metal collections, victory gardens, civil defense drills (someone yelling "Put out that light!"), and general shortages of rubber, butter and meat. Some of the gags ever persisted well after the end of WWII itself.
Walter Lantz
Columbia Cartoons
Other cartoons from World War II
Non-WWII propaganda cartoons
Modern homages and parodies