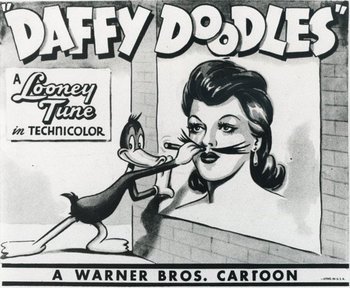 "Daffy Doodles" is a 1946 Looney Tunes cartoon starring Daffy Duck and Porky Pig, and directed by Robert McKimson, being his first full-length animated cartoon for a civilian audience (his first cartoon was "The Return of Mr. Hook", which was made for military audiences).

In this cartoon, Daffy Duck is a "mustache fiend", terrorizing a city by painting mustaches on every advertisement and person he can find. Officer Porky Pig sets out to capture the fiend; unfortunately, his wily adversary tricks him at every turn, leaving him with egg (and a mustache) on his face. Can the determined police pig bring the diabolical duck to justice?