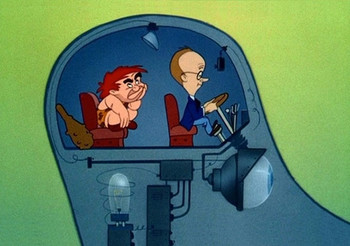 Reason and Emotion is a 1943 animated short film (8 minutes) directed by Bill Roberts.

The plot involves how humans are governed by reason and emotion, two emotions which are personified by two people living in the head of the unnamed male protagonist. As a baby, Emotion, personified as a caveman with a club, is the only person inside the man's head. This leads to the baby doing stuff like yanking the cat's tail and tumbling down a flight of stairs. Tumbling down the stairs and the pain that results leads to the birth of Reason, represented as a baby wearing glasses.

The short skips to the man's adulthood, with Emotion still in his caveman animal skins and Reason wearing a suit and tie along with his glasses. Reason is in the driver's seat (a literal driver's seat) most of the time, but occasionally Emotion takes over, like when the man propositions a hot woman and gets slapped for it (or a woman's emotion taking over and causing her to overeat at a diner). The negative effects of letting oneself be ruled by emotion are then demonstrated with a Real Life example— namely, Adolf Hitler, and how he led Germany into World War II.

Ollie Johnston of Disney's Nine Old Men animated the female Emotion, while another, Ward Kimball, did the male Emotion as a self caricature. Word Of God in the person of Pete Docter cited this short as inspiration for the Pixar feature Inside Out.