Western Animation / Eatin' on the Cuff 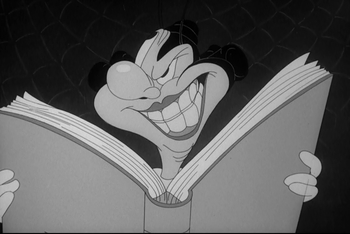 "I don't wanna set the world on fire, but it says a moth's attracted by a flame!"
Advertisement:

Eatin on the Cuff (or The Moth Who Came to Supper) is a 1942 Looney Tunes oneshot cartoon, directed by Bob Clampett.

In this half-animated, half-live action short, a pianist tells the story of how a moth going to marry his honeybee sweetheart gets sidetracked by eating men's pants in a bar, then gets pursued by a spinster black widow spider trying to seduce him.