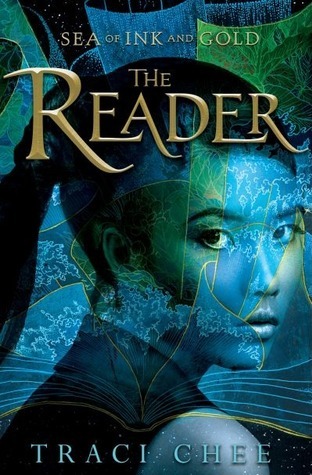 This is a book.
HeLlo.
If yOu're reading this, then maybe you know
you Ought to read everything. And maybe
you Know you ought to read deeply. Because there's
WitChery in these words and
SpelLwork in the spine.
And Once you know to look for signals in the smoke,
for Secrets in the sea, then you understand what it is
to rEad. This is a book. You are the reader. Look Closer.
TheRe's magic here.
Advertisement:

The Reader is a 2016 young adult fantasy novel by Traci Chee, and the first book in the Sea of Ink and Gold series.

In the world of Kelanna, things are similar to how our world once was, with one key difference—reading and written language was never invented by the inhabitants. The history of the world and of each other is preserved only through oral tradition, and many people seek fame and glory so that their own stories may be remembered for years after they are gone.

In this world, young Sefia is an orphan who sneaks around the island nation of Deliene with her adoptive aunt Nin. Her parents have since died, her father murdered by the people who have been chasing the family for years to obtain the strange object in Sefia's pack. One day Nin is caught and Sefia is left alone, with the only clue as to where to find her last remaining family member being the item her parents died for. A small rectangular item with an unknown symbol engraved into the cover, and filled with paper covered in strange markings. This is a book.

Meanwhile, in other places across Kelanna, other stories are unfolding. The famous pirate Captain Cannek Reed makes an unsteady alliance with one of his rivals to claim the greatest treasure in the ocean. The Director of a shadowy organization chases after a young girl who has taken what is rightfully hers. A young man is inducted into the mysterious Library and begins to fall in love with the Assassin-in-training also there. And legends fly of the ruthless pirate lord Serakeen, who has been raiding ships and kidnapping young boys and training them to become bloodthirsty killers.

Sefia meets and frees one of these boys, a mute she names Archer. He joins her as she pursues those marked by the symbol on the book in the hopes of discovering what happened to her aunt Nin. Between their pursuit by the Director and her mercenaries, and their run-ins with both noble and cruel pirates, Sefia discovers a magic power that lay dormant for years, and a legacy beyond her wildest imaginings.