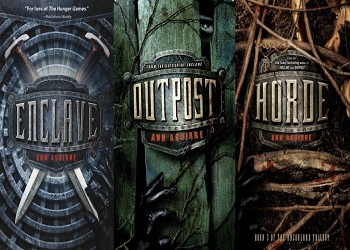 The Razorland Trilogy is a dystopian YA novel series by Ann Aguirre. It began in 2011, with the novel Enclave. It takes place in an After the End setting, with most of civilization living in underground enclaves and usually dying before they're thirty. The first three books were packaged as a Trilogy, but in 2017, Vanguard was released making the term a bit outdated.

Works in the series: