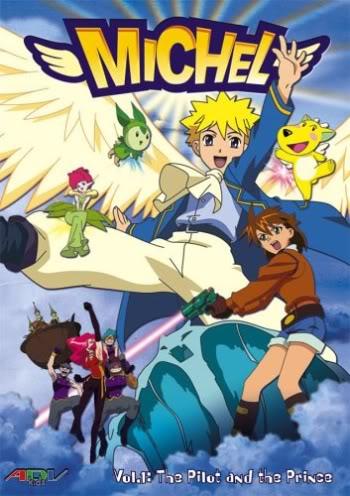 Guardian Fairy Michel (or just Michel in English) is a 2006 Korean animated series for children. It was released in English by the former ADV Films.

Kim White is a pilot, and the daughter of a famous scientist, Dr. White. She's constantly at arms with the Black Hammer Gang, a group of thieves with giant robots who'll go after anything so long as it vaguely resembles treasure. She goes after them one night after they steal a precious gem, and the two sides end up lost in a gigantic cloud formation known as the Devil's Coast. Strange, glowing lights pull Kim deep into the heart of the storm, and she fears it may be over...

...But she wakes up in a place with a clear sky, unhurt, beneath an enormous tree. A mysterious young boy named Michel greets her, and explains that she's landed on Sitel Island, home of the Tree of Life that keeps the balance of nature in check. Michel is a friend to the fairies of nature that live on the island. And Kim would be having a lovely time getting to know them, if she hadn't accidentally led the Black Hammer Gang to the island with her. With their robots, they kidnap all of the fairies, causing the tree to wither—and, in the process, transform all of the fairies into monsters!

The tree is destroyed, but there is hope—it will regrow from its seed if all of the fairies are rescued. Laura, the spirit of the tree, tells Kim and Michel to rescue all of the fairies. Michel is the Guardian Fairy, and can use his fairy friends' powers once they've been rescued. Kim is given the Arrow of Light, which can revert monsters to their fairy forms. Together, they must save the fairies, stop the Black Hammer Gang, and restore the balance of nature!

The kids try to pull this off in a police station.

The kids try to pull this off in a police station.