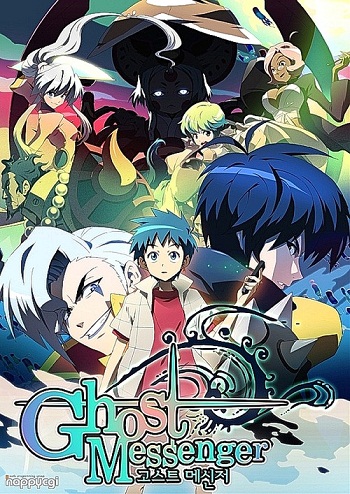 is a 2009 South Korean Animation, made by Studio Animal. Here's the story: Ghost Messengers are super-powered agents from Myung-gye(World of Death). The World of Death is a digitalized world with cutting-edge technologies that control and manage the life and death of all living things based on its elaborate systems. Armed with a special mobile phone(Soul Phone) used to stay in contact with his commanding officer and operator on missions or dispatches to different spiritual realms, Ghost Messengers are also able to download weapons like beam swords, projectile weapons, and miraculous beasts via their phone, hopefully giving them an edge in the fight. Which is all for the good, since the world of the invisible is becoming increasingly unstable, and the fantastical, mythological demons and evil spirits are threatening the strict balance of life on Earth.

And the adventure begins.

Episode one was launched as an OVA in 2009, and a new episode was going to be released per 2 months... but unfortunately became stuck in Development Hell due to lack of funds and other problems. Finally in 2012, episode 2 is going to be released, followed closely by the third.

Since most of existing Korean animation are focused on kids, Ghost Messenger is one of the most expectant animation for South Korean watchers.