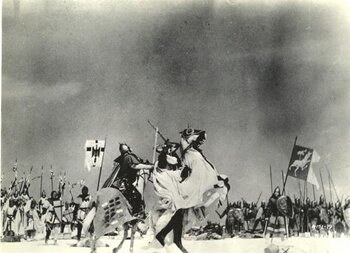 "I miss the hush. When I meet an opponent worthy of me. Everyone around us stops to watch. The din of battle drains away like a wave. And for a few moments, it's just the two of us. And then I kill him. And then everyone gets back to what they were doing."
— Achilles, Troy: Fall of a City
Advertisement:

Then, everything goes silent.

All around the chaotic fighting grinds to a sudden halt as the main event between our hero and the Big Bad gears up. All the fighters stop fighting and come into a circle surrounding the battle as the two main characters start circling, ready at any moment to strike. This moment when everything stops because of the Strike Heard Around the World is the Battle Halting Battle. Everyone stops and puts aside their differences to watch the fight between their leaders.

Related to Combat by Champion, in which case it's understood that the duel will actually decide the battle. May be caused by Leave Him to Me!. Possibly a more willing version of Locked Out of the Fight. Compare Battle-Interrupting Shout.