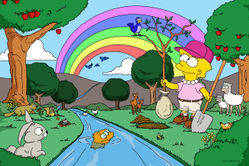 Lisa's crush on an environmentalist (voiced by Joshua Jackson) leads her to camp out on Springfield's tallest tree in protest over plans to have it felled. Meanwhile, Bart gets a job as a menu delivery boy for a Thai restaurant so he can raise money for a new video game system.