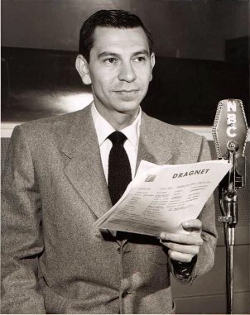 "For the next thirty minutes, in cooperation with the Los Angeles Police Department, you will travel step by step on the side of the law through an actual case transcribed from official police files."
Advertisement:

Archetype of the Police Procedural, this first installment in the Dragnet franchise followed the exploits of Sgt. Joe Friday and his various partners as they investigated crime in Los Angeles. The radio series ran on NBC from 1949-1957. Barton Yarborough portrayed Friday's original partner, Sgt. Ben Romero, from the start of the radio show until his death in December 1951. He was briefly succeeded by a few different partners, most prominently Barney Phillips as Detective Sgt. Ed Jacobs, before Ben Alexander took over as Officer Frank Smith from late 1952 to the end of the radio run.

Friday and his partners rotated through the various departments from week to week, allowing them to solve not only murders, but also fraud, arson, and drug-smuggling. Each episode ended with an announcer giving the results of the perp's trial. The show spawned a number of Catch Phrases and featured an iconic four note Sting used as a Theme Tune.