Web Video / The Wizards Of Aus 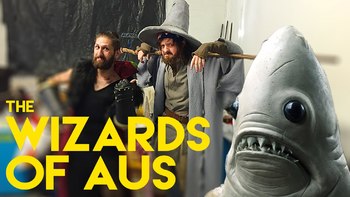 "The Wizards of Aus" is an Urban Fantasy comedy series commissioned for SBS On Demand, subsequently released on Youtube. Fed up with the Magical Realm’s obsession with large-scale fantasy warfare, Jack the Wizard decides to migrate to the sanest place he can think of: Melbourne's Western suburbs.

Unfortunately, his presence alone is going to turn it a less sane place, especially when his old life decides to follow him.

The series is now completed with a total of six episodes, all available here

Tropes found in "The Wizards of Aus" include: