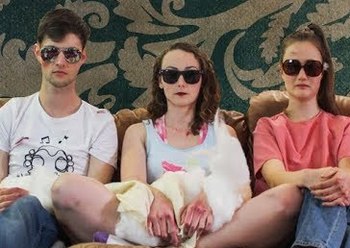 Three days cooped up with this lot will leave you a barking lunatic.note From left to right: Nix, Presley, and Sesh. Not pictured: William.
Wolfgang

and released on her YouTube page, Monarchs Factory. The show is not about classical musicians as one might suppose, but instead focuses on three Australian inner city werewolves on the three days they transform during the full moon. What do they do in the hours between transforming into bloodthirsty beasts? Honestly? Not much. But that's kind of the fun.
Advertisement:

The episodes for the series were released in real time, meaning there are three episodes corresponding to every full moon of 2018. All the episodes can be found here.