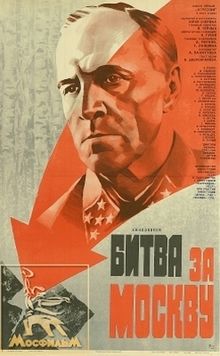 Battle of Moscow (Битва за Москву) is a 1985 Soviet, German, Czechoslovak, and Vietnamese film by Yuri Ozerov about the successful heroic defense of Moscow from Nazi attack in the Great Patriotic War. The film was released in two parts, as seen below:
Advertisement:

In the aftermath of the victory in France, Hitler decides to attack the Soviet Union and selects Marshal von Bock in charge of leading the Wehrmacht into Russia. Ilse Stöbe, Rudolf von Scheliha and Richard Sorge inform of the danger, but the Soviet intelligence dismisses their warnings. Zhukov is concerned that the army is ill-prepared; Pavlov decries him as a fear-monger. The Red Army officers are convinced that in the event of an invasion, they would immediately counter-attack. On 22 June 1941 Germany launches Operation Barbarossa, overwhelming the Soviets.

The Red Army tries to counter the assault with a string of hasty operations, while the Brest Fortress is desperately defended. The Soviets manages to recapture Yelnya but having Major General Konstantin Rakutin killed in action. Stalin insists on defending Kiev, and his forces suffer immense losses.

The Wehrmacht enacts Operation Typhoon. Richard Sorge finds out that Japan won't attack the USSR at 1941. The Germans approach the Soviet capital, winning the Battle at Borodino Field and breaching the Mozhaisk line. Stalin decides to remain in Moscow.

The enemy is at the outskirts of the city, yet the traditional 7 November parade takes place as always. Zoya Kosmodemyanskaya is captured and executed, and Panfilov's men fight to the last. Rokossovsky begs Zhukov to allow retreat but is refused. After all seems lost, the Germans grind to a halt. On 6 December, the Soviets launch a successful counter-offensive.