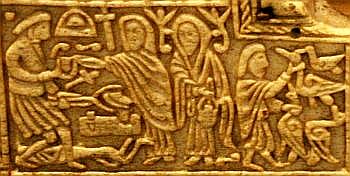 Wayland (or Weyland), often referred to with the epithet "the Smith", is the modern English name of a mythical master smith of Germanic Mythology. In texts from different times and places, his name may be found spelled Wieland (Modern German), Wēland (Old English), Völundr (Old Norse), Wiolant (Old High German), and others.

Besides being an unsurpassed master smith, Wayland is also the protagonist of a gruesome vengeance tale that survives in two text sources, but can be traced in literary allusions and depictions in Early Medieval Art from places as far apart as England and Gotland and as far back as the 8th century. The core of the legend is how Wayland's smithing skill aroused the covetousness of a tyrannical king, who had Wayland taken captive and hamstrung so he would not run away. For years, the unjust king forced Wayland to forge weapons, armor and jewelry for him until Wayland gained the trust of the king's children and cruelly used it to implement his vengeance: He murdered the two boy sons of the king, then crafted the skulls of the boys into drinking cups for the king, their eyes into brooches for the queen, and their teeth into a collar for the princess. Then he raped and impregnated the princess. Finally, he devised a means to escape by flight, but not before, cruelly gloating, revealing his acts to the defeated king.

In other respects, the sources diverge. To wit, the two relevant works are the following:

Despite Wayland being interpreted as a human hero in both texts, there are numerous hints that Wayland is more than a mere mortal: "Völundarkviða" calls him "ruler of elves", while his father in Thidrek's Saga is a giant. Altogether, it seems that before Christianity, Wayland was functionally a demigod and the closest thing Germanic mythology had to a god of smithcraft. This may also explain the fantastic cruelty of Wayland's revenge, which, by its excessiveness, is likely to kill all audience sympathy for Wayland: In its original context, the tale was probably not a heroic legend, but a myth about an overbearing mortal who thought he could enslave a divine being, and eventually faced the dreadful punishment for hybris. Other fragments tell that the son he got with Bodvild, the daughter of king Nidhud, became a hero and warrior in his own right. He was known as Vidigoia or Viderik.

In Germanic legend, exceptionally good weapons or fine jewelry are often introduced as being made by Wayland. Examples include Beowulf's mailshirt in Beowulf and Mimung, the sword of Vidia in the German Dietrich von Bern cycle.

The memory of Völundr, and of his son Vidigoia spilled over to the Medieval Ballads, where one spesific song tells the story of Viderik Verlandsson and his grand deeds.