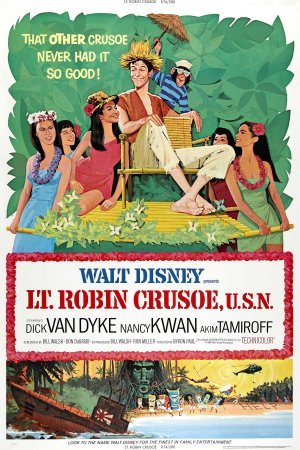 "Dearest, sweet, thoughtful, understanding Jane. I know you won't believe this, sweetheart, but here goes anyway. You may recall, you and I were to be married a year ago last June. As I didn't turn up for the wedding, and so much time has gone by, I can imagine you have been wondering, ha ha, what happened..."
—Crusoe (First lines)
Advertisement:

A fun 1966 live-action Disney comedy directed by Byron Paul and starring Dick Van Dyke. As the title suggests, it's a Robinson Crusoe story, and as the star suggests, it's purely done for the comedy.

Robin Crusoe (Van Dyke) is a U.S. Navy pilot whose fighter jet fails during a routine mission, forcing him to ditch somewhere in the Pacific Ocean. He braves the perils of survival in a life raft — accompanied by an oddly comprehensive instruction manual — before being washed up on a tropical island. There he meets his Man Friday in Floyd the Space Chimp, and his Girl Friday, whom he names Wednesday (Nancy Kwan). But Crusoe's survival of the elements is nothing compared to surviving Wednesday's father, the headhunter chief Tanamashu (Akim Tamiroff)...

"Anyway, dear, that's just the way it happened. I'll be home soon. All my love, Rob."