Film / The Fighting Prince of Donegal 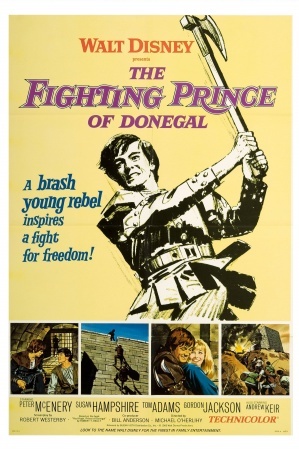 It is based on the novel Red Hugh: Prince of Donegal by Robert T. Reilly and loosely follows the real-life exploits of late 16th century Irish prince Hugh Roe O'Donnell

(McEnery). The story begins in 1587, when Hugh's father, the Chief of the Name

, dies, leaving his son as chief of the O'Donnell clan. It seemingly fulfills an Irish prophecy which promises freedom from English rule, when Queen Elizabeth I had large parts of Ireland occupied.

In response, Sir John Perrott (the Queen's Lord Deputy) abducts Hugh, imprisons him in Dublin Castle as a hostage for the Clan's good behavior. Hugh must then escape before he is sent to a certain death at the Tower of London and rally the Irish clans to send a message of rebellion to the Queen.

The film got a Comic-Book Adaptation by Gold Key Comics in 1967, Walt Disney Presents: The Fighting Prince of Donegal.

The Fighting Prince of Donegal provides examples of: