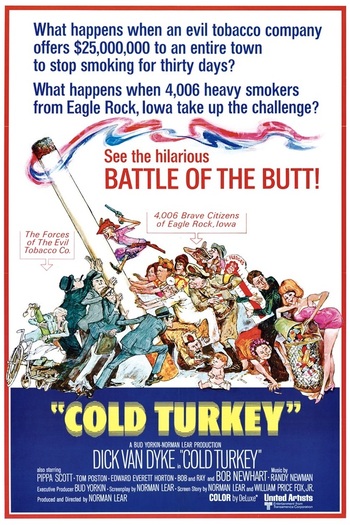 A 1971 satirical black comedy film produced, directed, and written by Norman Lear (just prior to his creating television's All in the Family).

In the economically-depressed town of Eagle Rock, Iowa, the Reverend Clayton Brooks (Dick Van Dyke) spearheads his community's effort to rise to the Cold Turkey challenge. In a campaign devised by crafty public-relations expert Merwin Wren (Bob Newhart), the Valiant Tobacco Company has promised a $25-million cash prize to any town in America that can quit smoking completely for 30 days. So Brooks leads the charge in this "Battle of the Butt", hoping to become a local hero in the process. But when Wren shows up in Eagle Rock to undermine his efforts, and nationally-famous media personalities (all played by Bob & Ray) turn the spotlight of celebrity onto the town and its citizens, this wicked comedy kicks into high gear.

Notable for featuring the first movie score written by Randy Newman, acting as the poor man'sinvoked Elmer Bernstein for the film's music at the time before ultimately becoming the Spiritual Successor to the latter following his passing in 2004. (Interestingly enough, in the opening scene where Wren is talking to Hiram C. Grayson, a banjo can be heard playing Bernstein's theme music from The Magnificent Seven).