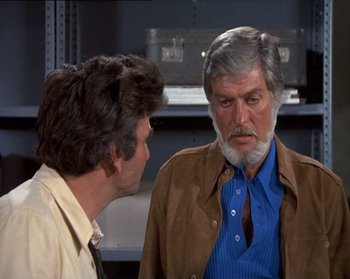 "Negative Reaction" is the second episode of the fourth season of Columbo.

Paul Galesko (Dick Van Dyke) is a professional photographer who is stuck in an unhappy marriage with his controlling, emasculating, shrewish wife Frances (Antoinette Bower). Paul doesn't want to be married anymore, preferring instead his good-looking and obviously very interested assistant Lorna McGrath (Joanna Cameron), but he still wants Frances's money. So Paul decides to kill his wife and stage a fake kidnapping as his story. He creates a fake ransom note, then drives his wife to an isolated ranch house, where he ties her up, takes ransom photographs with an off-time clock (to create an alibi), and then shoots her.

His fall guy is poor unfortunate ex-convict Alvin Deschler (Don Gordon), who Galesko met during a photography assignment at San Quentin, and who thinks he has lucked into a job as Galesko's assistant. Instead, Paul leaves incriminating evidence in Deschler's hotel room, lures Deschler to a remote junkyard, and kills him too, after tricking Deschler into getting his prints all over the ransom note. Finally, Paul puts the gun he used to kill his wife into Deschler's hand and uses it to fire a shot into his own leg, to make it look like he killed Deschler in self-defense.

It seems to be an open-and-shut case: Deschler's prints on the note, Deschler's prints in the house where Frances was found (Paul tricked Deschler into doing that by supposedly hiring Deschler as a stand-in to buy him the house), Deschler's prints on the gun that killed Frances, the newspaper that was used to make the ransom note in Deschler's hotel room. Unfortunately for Paul, Lt. Columbo is the investigator, and finds a couple of flies in the ointment. A hobo who happened to be sleeping in an abandoned car in the junkyard reports that there was a long pause between the first and second shots. There's a powder burn on Paul's pants, which there shouldn't be if he was in a shootout with Deschler. There's a lack of dust on the clock in the ranch house. And he wonders why a kidnapper like Deschler would be taking cabs everywhere he was going up through just a few days before the murder.

Joyce Van Patten, who plays a kind-hearted nun in this episode, played the murderer in Season 6 episode "Old Fashioned Murder".