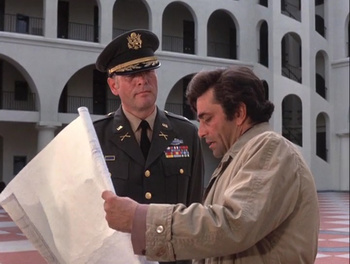 "By Dawn's Early Light" is the third episode of the fourth season of Columbo.

Patrick McGoohan, in the first of four Columbo episodes where he plays the murderer (and the only one of said four appearances where he wasn't also directing), is Colonel Lyle C. Rumford. He's the commandant of Haynes Military Academy, a military college that is really The Citadel

with the serial numbers filed off, and transplanted to Los Angeles (in fact, this episode was filmed at The Citadel).

Haynes Academy has fallen on hard times, with enrollment at barely a quarter of capacity, as military schooling is no longer an easy sell in the post-Vietnam era. William Haynes, grandson of the founder of Haynes Academy, doesn't have Rumford's respect for the institution, and personally loathes Rumford, having himself attended the academy as a cadet earlier in Rumford's tenure. Haynes has an idea to revive the sagging fortunes of the academy: converting the academy into a co-ed junior college. Rumford, the hidebound traditionalist, is horrified, and moreso by the fact that Haynes also is intent on removing Rumford from his leadership role.

Rumford decides to kill Haynes. Haynes has arrived for the Founder's Day ceremony honoring his grandfather. Rumford tampers with the ceremonial cannon in the courtyard, and when Haynes fires it, the cannon explodes and he is killed. Rumford has a fall guy: Roy Springer, a less-than-stellar young cadet who had been tasked with cleaning the cannon. When Lt. Columbo of the LAPD finds the shredded remnants of a cotton rag soaked with gun oil, Rumford suggests that Cadet Springer forgot to remove his rag, thus plugging the barrel and causing the explosion. But Columbo is still troubled by other evidence, like the mysterious blueprints in Haynes's car, and the fact that the explosion was unusually loud...and his suspicions are confirmed when chemical analysis shows traces of C4.

Father-and-son Bruce Kirby and Bruno Kirby appear as Sgt. Kramer of the police and Cadet Morgan of the academy. Patrick McGoohan won an Emmy for guest star on a drama for his appearance in this episode.