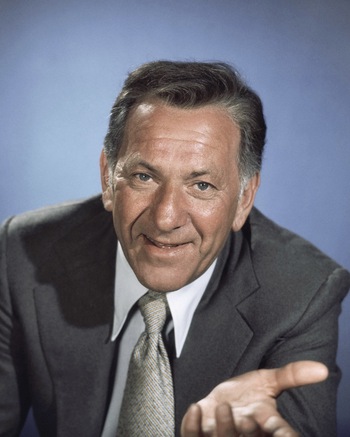 Jack Klugman (April 27, 1922 – December 24, 2012) was an American actor and screenwriter. He was a regular presence in film and television from the early post-World War II era until the early years of the 21st century.

After serving in the U.S. Army during the war, Klugman attended Carnegie Mellon University in Pittsburghnote Klugman was a native of the somewhat nearby metropolis of Philadelphia in hopes of becoming an actor. He acted onstage in New York City and also made numerous appearances on TV. He gained notice for playing Jack Lemmon’s Alcoholics Anonymous sponsor in Days of Wine and Roses.

In 1970 Klugman was cast as Oscar Madison in the sitcom The Odd Couple. Running for five seasons, the show was a Star-Making Role for both him and to a lesser extent its Felix Unger portrayer Tony Randall. (Lesser because Randall had already been considered a lead actor.) Soon after that series signed off, Klugman got another hit show, playing the title character for seven seasons on Quincy, M.E..

Klugman died of prostate cancer in 2012, after an earlier bout of cancer had claimed one of his lungs. He was married twice to actress Brett Somers, with whom he had two children. During his final years he was married to Peggy Crosby.