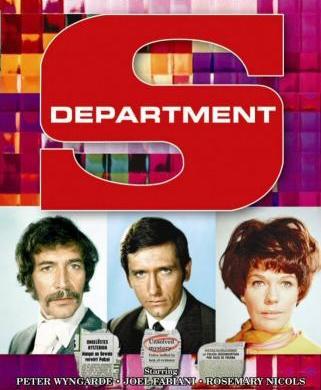 Department S is a British Crime Drama series which ran between 1969 and 1970. The titular Department was a department of Interpol which took on cases that other crime agencies couldn't solve, either because they were too baffling or because sometimes it wasn't even certain that a crime had been committed. The Department was tasked by diplomat Sir Curtis Seretse (Dennis Alaba Peters) and was headed by former FBI agent Stewart Sullivan (Joel Fabiani) and assisted by computer expert Annabel Hurst (Rosemary Nichols). The third member of the team, mustachioed crime writer Jason King (Peter Wyngarde), was given his own spin-off series.

The joy of the series came from the bizarre plots the writers thought up (sometimes involving a Locked Room Mystery, sometimes just involving circumstances that were plain weird) and the way the three main characters used their own methods of solving the crimes; Stewart Sullivan dived straight in, Annabel Hurst took a more logical analytical approach and Jason King was the ideas man. Their boss Sir Curtis Seretsenote  Named in honour of Sir Seretse Khama

was a cool, competent international diplomat of Nigerian extraction who sometimes took an active part in missions. At this time it was very rare to see black actors in leading roles on British television.

Had a slightly unusual format in that the Cold Open to each episode would finish with the episode title, writer and director credits before the title sequence. In most shows, of course, these would come at the beginning of Act One.