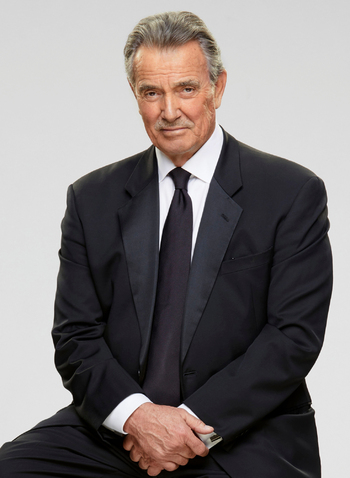 Hans-Jörg Gudegast (born April 5, 1941 in Kiel, Schleswig-Holstein, Germany), better known as Eric Braeden, is a popular actor, mainly in the television medium, though he has appeared in a few well-known movies.

Hans emigrated to the States as a teenager and worked a variety of jobs in Texas and Montana. His athleticism led to a track-and-field scholarship to Montana State University. (He's also an excellent soccer player and amateur boxer; in his autobiography I'll Be Damned, he said that given the choice between being in a roomful of athletes or a roomful of actors, he'd choose athletes every time). While a student at Montana State, he and a friend made a documentary about a rafting trip they'd taken, called The Riverboaters. Gudegast went to Los Angeles to try and sell the film, but was told that his Germanic good looks would play well in Hollywood, so he took up acting.

For the first few years of his career, Hans discovered that the combination of his name, along with his looks and accent, mainly got him cast as spies or German soldiers in series such as Combat, The Man from U.N.C.L.E. and Mission: Impossible. Eventually, he landed a regular role on The Rat Patrol as Hauptmann (German for Captain) Hans Dietrich. Hans played the character as an intelligent, reasonable Noble Demon who just happened to be working for the wrong side and respected the titular heroes, and they in turn respected him. Off-camera, the cast became very close and often attended Gudegast's soccer games.

After two seasons, The Rat Patrol ended in 1968. A year later, Universal wanted to cast Hans in the lead in the movie, Colossus: The Forbin Project, but wanted him to change his name. He reluctantly took the stage name of Eric Braeden (in an interview, he explained that the second part of his stage name was after Braedenbek, the name of a town in Germany, but he altered the spelling so it wouldn't be mispronounced as breedin'), and the film was released with his new stage name.

Braeden's career took off from there. Although he didn't do a lot in the way of film work, he was a popular television guest, turning up on countless series where a dark, villainous type was needed, in crime dramas like Hawaii Five-O, Westerns like Gunsmoke and other action series like Wonder Woman.

After spending the 1970's largely as a guest actor, Eric decided to take a part in the soap opera The Young and the Restless. What was supposed to be a three-week role proved to be extremely popular, blossoming into a role that has lasted over forty years, and he and his character of Victor Newman have reached iconic status. Eric was surprised, and a little saddened, when (he admitted this in an interview) he went to the White House, visitors were more excited to see him than President Bill Clinton!

Braeden continued to do occasional work in prime-time TV (Murder, She Wrote, The Nanny, Diagnosis: Murder, How I Met Your Mother) and in movies (Titanic (1997), where he played John Jacob Astor). In 1998, on the fifth try, he finally won the Daytime Emmy for Best Actor.

Regarding Titanic, Braeden described filming Astor's death scene as the most terrifying moment of his career, because of how similar it was to his own experience. In 1945, Braeden was on board the Wilhelm Gustloff, a Nazi cruise ship that was evacuating civilians from the Baltic coast, when it was torpedoed by a Soviet submarine. More than 9,000 people perished, six times as many on the Titanic.

Films with Eric Braeden that have TV Tropes pages: